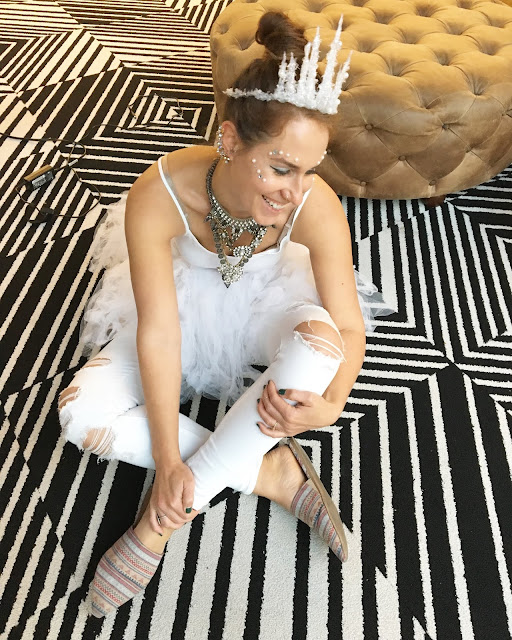 Look, I haven't always been a lover of Halloween. While a candy-centric holiday is 100% my jam, the heavy emphasis on haunted houses and slasher films sort of nets everything out for me (for the record, I startle easily and hate jump scares). BUT, that was before I found my deep seeded love for costumes. Guys, who doesn't love to pretend to be some fantastical character or socially relevant statement?

I get that not everyone is as into Halloween costumes as I am, and honestly, that's probably healthy. I'm going to assume you're much more mentally grounded than I am, but I'm going to go ahead and save that discussion for my therapists couch. Anywhooooo, costumes. Look, I get it. I'm pretty sure I was the devil for 6 years running as a kid. In college, I fell into the camp that thought leggings + animal ears was suitable attire for party hopping. But we live in an Instagram world and that ish just ain't gunna fly anymore. You will be judged on the quality, cleverness and/or relevance of your costumes. That's just the social media world we live in! And if you think about it, I'm not here to judge, I'm here to help. It doesn't take a ton of money and it doesn't take a ton of time to throw together some pretty passable costumes. Bonus: they're work appropriate! And before you come at me, yes I DO wear a costume to work. Because I do what I want so back off!

**My best piece of advice if you're looking to DIY your costume is to evaluate what you already own. I would find costumes I loved on Pinterest, often didn't have the "base" in my closet and didn't want to spend a ton of clothes or jewelry I'd only wear once.

BALLERINA/WIND-UP DOLL/ICE QUEEN:
The #1 easiest costume to make is one that involves a tutu. It costs less than $10, involves a piece of ribbon and a spool of tulle. And the best part? No sewing necessary. For a simple step-by-step, click here. 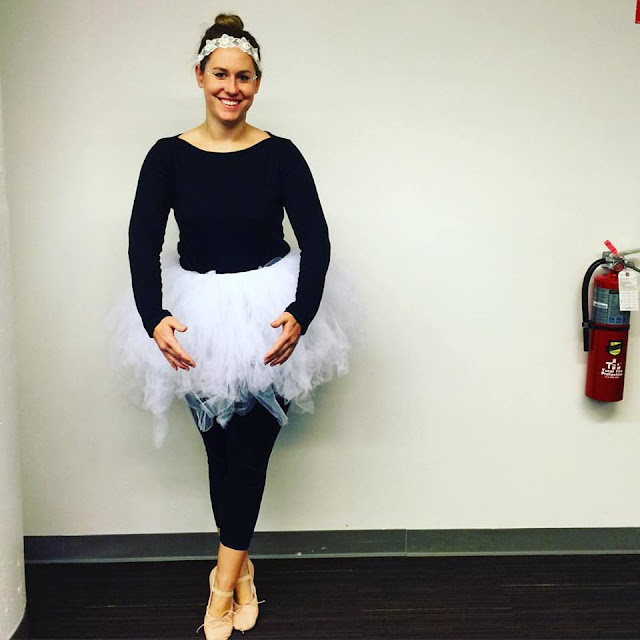 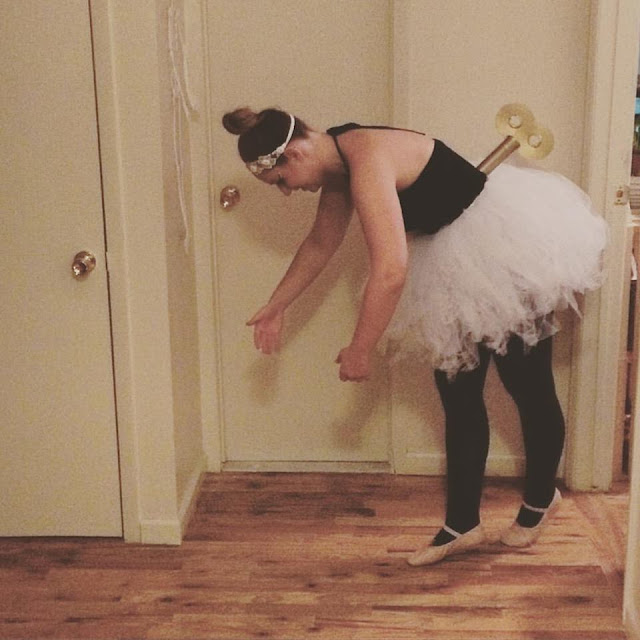 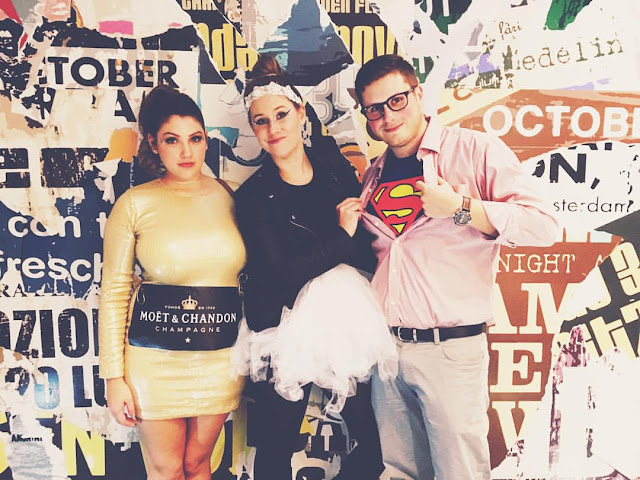 FLAPPER:
Lets all admit to our selves right here and now that a small part of us wishes we could have lived during the 1920s's? Well, scratch that, lived and been rich during the height of the prohibition era? Every time I watch any adaptation of the Great Gatsby or Midnight in Paris I swoon over the fictional life that could have been. If everyone wasn't so drawn to the glitz and glamour, I doubt it would be as popular a Halloween costume as it is. Just check Amazon if you don't believe me; there are beaded, tasseled and sparkly dresses galore. However, if you'd rather go the DIY route, look through your closet for any black or beaded dress (mine was a gift from a friend years ago) and just add a headpiece and some pearls.

For the headpiece, I searched the craft store for some rhinestones ribbon (mine may have actually been a lanyard I found in the clearance section of Michael's that I cut the key ring off). I glued the ribbon into a circle and affixed a rhinestone broach I had laying around. Since I don't own a ton of pearls, I bought a pack of beads at Michael's and strung them on some cheap thread (and just tied the ends when it got to my desired length). As far as the hair, I followed a YouTube video that involved curling your hair and pinning it under your head into a faux bob. 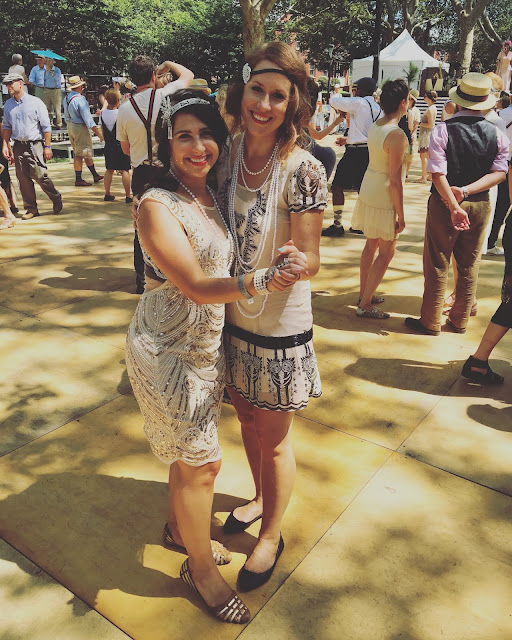 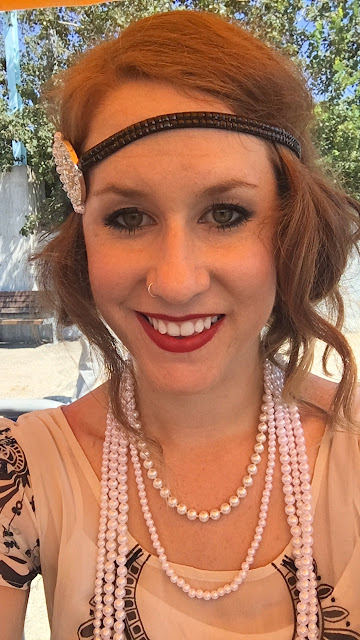 MIA WALLACE (PULP FICTION):
This is probably the simplest costume of them all. I went to the Halloween store the week before and grabbed a short black wig with bangs (if you can't find a short one, you can either cut the length -- Amazon also has a bunch of great wig options). I paired it with a white button down and black cropped pants I already had in my closet. Lastly I just picked up a box of candy cigarettes and I was done. **I would have gone all out but I think HR would have frowned on that. 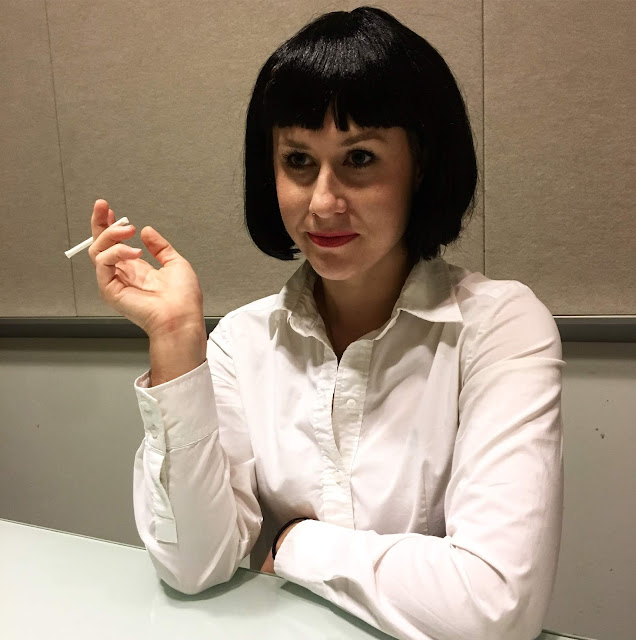 SQUIRREL & CHARMANDER (POKEMON GO):
Okay, this one may not be as easy to make, but I promise it can be done with relative ease (since I made mine the night before my sister and I needed to wear them). I already owned an orange running shirt and just ordered a pair of cheap orange leggings off Amazon. Then I went to Michael's and got one of those basic cotton shirts they have in orange, sheets of red and black felt, some orange and blue foam board and a pack of feathers that included orange, red and yellow.

I cut up the orange shirt to make half the long tail as well as a my headband. I had an old white shirt I used as the second part of the tail. After I cut the tail shapes, I hot glued the feathers to the very tip and used fabric glue along the edges of the tail shapes to adhere them together. Keep in mind that when you plan on stuffing something, you need to remember that the fabric, after glued, needs to be right side out. So I glued the feathers to the outside so that when it was flipped, they ends wouldn't be showing. After the glue was dry, I stuffed the tail with stuffing from an old pillow I was planning to throw away. I closed up the shape with more fabric glue and hand sewed on some elastic ribbon I had laying around so it fit like a belt on my waist. If my instructions we're clear enough, try this video tutorial. For the wings, I just followed a template I found online. Instead of using fabric, like the instructions did, I just used the foam board and glued the blue on top of the orange. Lastly, I used orange ribbon to make straps. This isn't the template I used, but it seems to be easier. Lastly, for the headband, I just cut out the shapes of Charmander's face from the felt sheets and hot glued them to the headband. 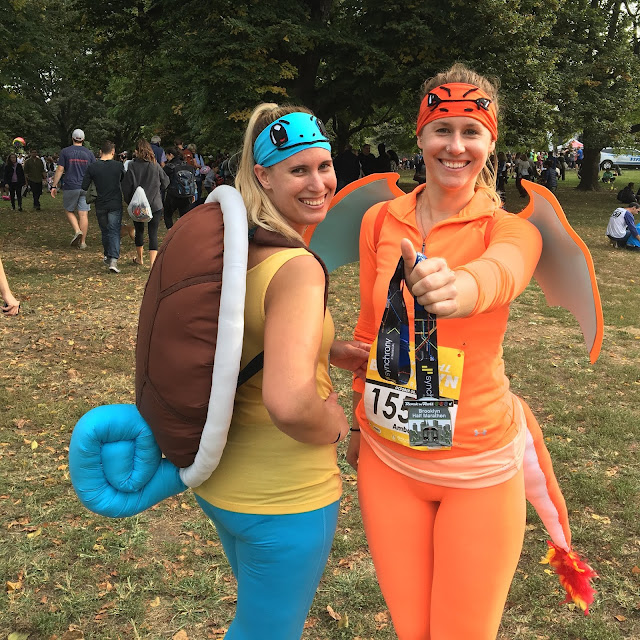 BANK ROBBER:
Another super easy and relatively low cost costume. I already owned the striped shirt, black jeans and black beanie. I just added some black gloves I got in the dollar section of Michael's, a plastic black mask I found at the craft store and drew a $ sign on a canvas tote I found at the craft store. My sister and I also recreated my bank robber costume for one of our recent races. Instead of a plastic mask, we cut up an old black t-shirt for the masks and my sister made the messenger style bags with some white cotton fabric and a few passes through her sewing machine. Lastly we painted a gold $ signs on the front and stuffed them with paper to give them a little extra bulk. Paired with a striped shirt and black running pants, it was one of our favorite running costumes to date! 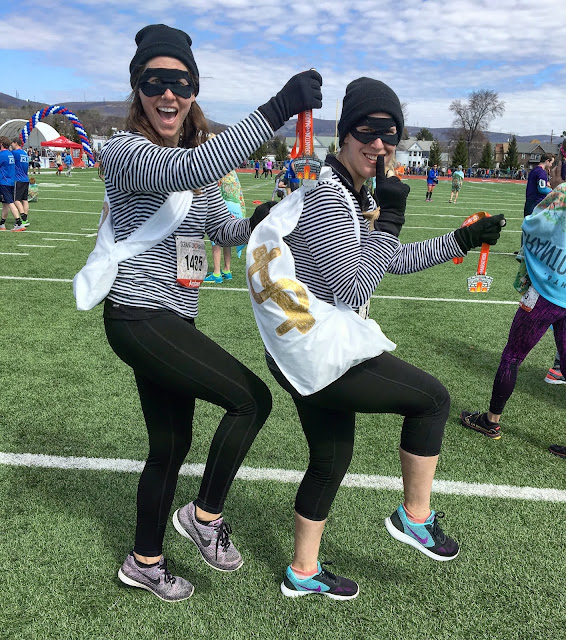 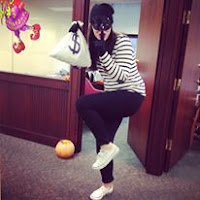 MARY POPPINS:
My Mary Poppins costume came together at 10 p.m. the night before I ended up wearing it for work. I already owned the white button down (as seen with the Mia Wallace costume), a black skirt, a black floppy hat and black tights. I had some red felt in my craft bin in order to make the bow-tie (just make a loop and hot glue a strip down the center to create the bow shape) and red ribbon for the belt. The white flowers were just paper that I cut out and tapped to my hat, in addition to some of the red felt cut into little "berries". I used a piece of jewelry wire I had in my supplies to make the flower that is sticking out. I luckily had a black umbrella laying around and borrowed the bag from my coworker to complete the outfit. It pays to have a craft stash sometimes. 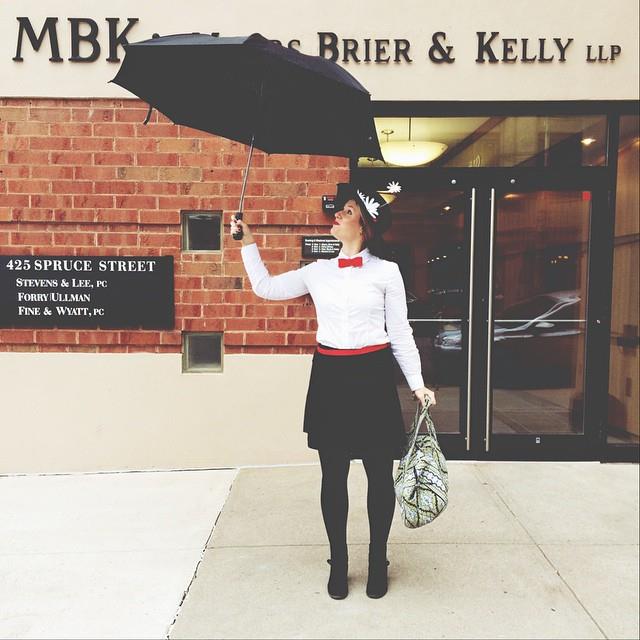 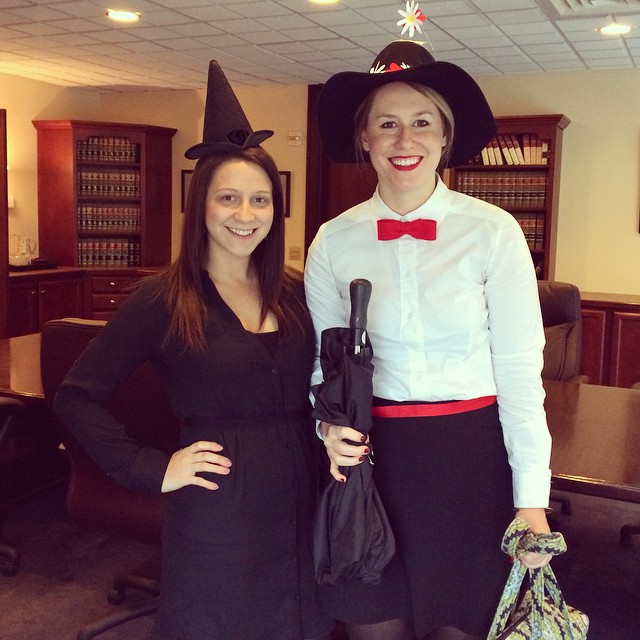 OLD LADIES:
Lastly, I'll round out this post with a group costume. Weirdly, this is the costume that rekindled my child-like love of Halloween costumes. All of us went rummaging at the thrift store for our outfits. My friend was even lucky enough to even find a walker at her Goodwill! I borrowed a cane from my mom and got packs of hair curlers from the dollar store. We used grey hair spray from the craft store and used a combination of powers and eyeliner to draw wrinkles over our faces. Some poorly applied lipstick and dollar store reading glasses completed the look. Shout out to my other friend for rocking the fanny pack over the dress. Really drove it home. 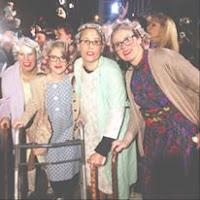 Tell me, what are your cheap and easy Halloween costume DIY's of past years? I'd love to get some new inspiration!
Labels: Costumes DIY Halloween What I Wore 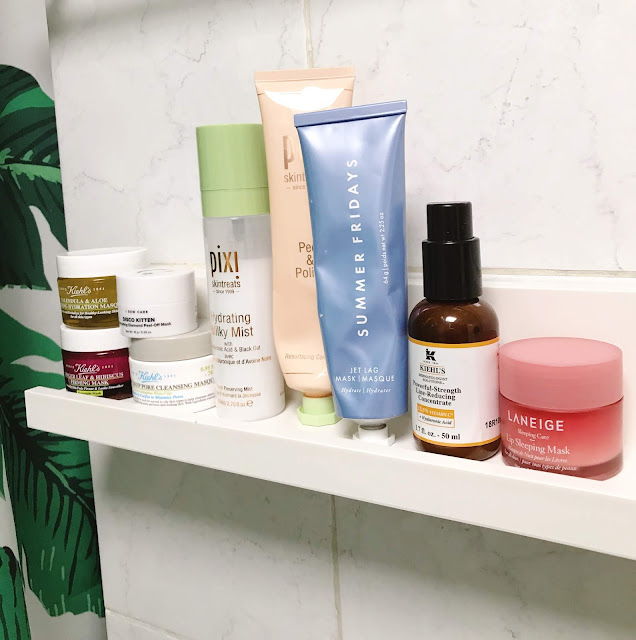